I’ve been making waffles about as long as I’ve been making pancakes.  However waffles aren’t requested as frequently as pancakes.  Maybe it’s because in my family we eat them hot off the griddle and you can fit a lot more pancakes on at one time than the limited 4 portions determined by a waffle-iron.  Despite what many a friend of mine thinks, waffle batter and pancake batter are not the same.  At least not in this house.  Although you beat the egg whites until stiff peaks form for both, that’s about the only step that’s the same.  So if you have a waffle-iron laying around collecting dust, it’s time to brush it off and whip up these quick, light and fluffy waffles.  These are nothing like Belgian waffles that you’d order at a restaurant (for better, in my humble opinion), they’re much softer, almost delicate (which obviously means you can eat more!). 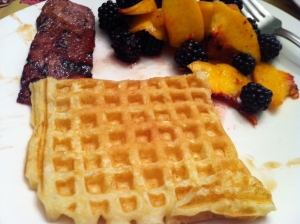 If you want to be special (like me ;)), I recommend topping your waffles with creamy peanut butter, homemade syrup, and, if you have one on hand, banana slices…DELICIOUS!